Sean Doherty Carves Out Name for Himself in Biathlon 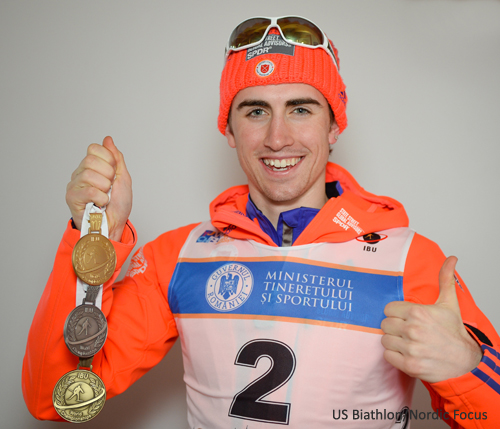 One of the most decorated young athletes in biathlon history isn’t from Russia or Norway or even Germany. 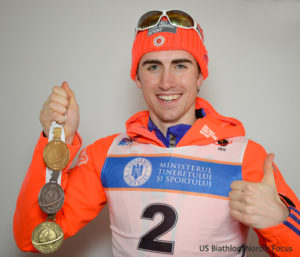 No, he hails from Center Conway, New Hampshire, and views intense mountain training sessions as nothing more than glorified “exploring.”

Sean Doherty, winner of 10 individual medals at the youth and junior world championships, is a rising name in a sport that combines cross-country skiing and rifle shooting.

The 20-year-old’s plans are actually etched in wood: Open a wood-working shop so he can create hand-crafted platters, vases and bowls, like the cherry-wood one he presented to his longtime coach, Algis Shalna, as a birthday present.

More immediate, Doherty is taking aim at the 2018 Winter Games in South Korea as he tries to earn the first Olympic medal for America in biathlon.
Granted, the Winter Olympics are still two years away. But that’s two more years to cement himself as a bona fide contender in a sport where nations such as Germany (45 total Olympic biathlon medals), Norway (35) and Russia (24) usually dominate.

“South Korea is a bit far off to be telling expectations,” Doherty said in a phone interview from Romania after winning three medals, including gold in the 12.5-kilometer pursuit, at the junior worlds in what was his final year of eligibility. “The amount of progress and amount of things I’ve gone through, changes I’ve made in the last two years, couldn’t have nearly been predicted or expected. I can’t even begin to speculate two years from now.”

Leave that to his coach, who’s from Lithuania and captured gold at the 1984 Olympics as a member of the Soviet relay team. Shalna started mentoring Doherty at 12 and while he doesn’t work directly with him as much — Shalna serves as a regional coach for the U.S. squad — he does stay in close contact.

“I will not be surprised if he comes back with the medal from Korea,” Shalna wrote in an email. “If not then, it will be just a matter of time. … He is super young at the level he is now.”
Super determined, too.

Doherty used to make a nearly three-hour commute from New Hampshire to Jericho, Vermont, in order to attend Shalna’s camps and weekend practices.
Always a skilled cross-country skier, he’s been improving his marksmanship. In biathlon, you ski to a target, then try to compose your racing heartbeat enough to hit five targets in five shots.

“We spend many hours and years training to learn how to deal with high heart rates while we’re shooting,” Doherty said. “Because the clock never stops at any point during the race. You can’t slow down and wait until your heart rate is more relaxed and it’s easier to shoot. You have to learn to cope with that stress load.”
His way? Simple.

“Just making sure you are in a state of mind to shoot,” said Doherty, who will compete in a World Cup event in Presque Isle, Maine, beginning next Thursday. “If you’re frantic and start to shoot, it’s never going to work out that well.”

Over his career, Doherty has captured four gold, four silver and two bronze medals in the individual competitions at junior world championships. He also earned a spot on the 2014 Sochi Olympics squad at age 18 and the men’s relay team finished 16th.

“It was a great experience. More of a learning experience than anything else,” Doherty said. “Now I have the experience going into the next.”
Lofty expectations await — to earn that first Olympic biathlon medal for an American. Not that it fazes him.

“Sean has great natural ability for endurance sports but biathlon requires another great ability, which is high confidence in your actions in order to shoot well. He’s got this,” Shalna wrote. “Also, he has a great feel about handling the training and never gets emotional.”

On days when Doherty can carve out some free time, he likes to, well, carve. He has his own wood lathe, too, even hauled it with him to the Olympic Training Center in Lake Placid, New York, last summer.
“Someday, I’d like to build my own shop,” he said. “That’s my eventual goal.”

Shalna thinks so much of his biathlon pupil’s work that he keeps the bowl Doherty made for him in a special place — next to all of his trophies.
“Another talent (of his),” Shalna wrote. 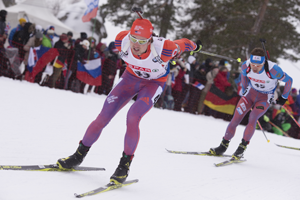