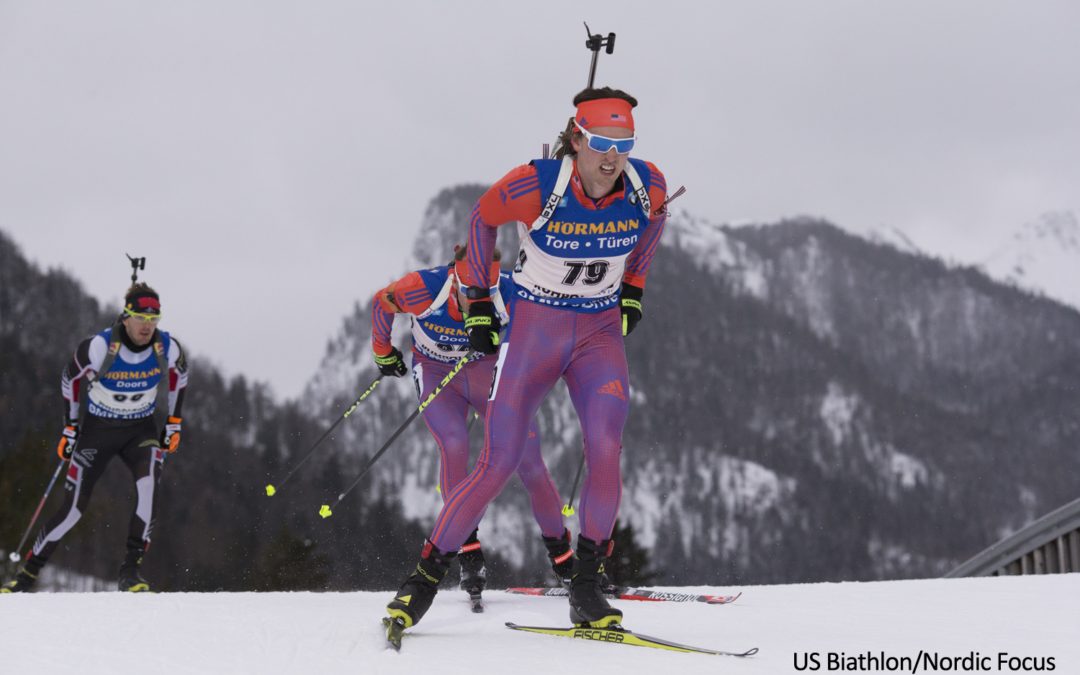 This article originally appeared in the Conway Daily Sun

Sean Doherty, of Center Conway, is a member of the Senior Men’s US Biathlon Team. He is competing at the highest level of his sport, on the Biathlon World Cup Circuit.

After being on the sidelines at the beginning of the season due to mononucleosis, Sean rejoined the team in Oberhof, Germany, the fourth stop of the circuit, where he performed his first world cup race of the season. While he was in Antholz, Italy, we got the chance to catch up with Sean. He and the U.S. Biathlon Team had just finished the fifth round in Rupholding, Germany and were working their way through the Antholz races. The men’s relay team placed 12th in Ruhpolding with Sean as anchor. He also had a fantastic sprint race, shooting 9 out of 10 and finding himself in 40th. Sean then moved forward to the pursuit, placing 43rd and was coming back strong for the season after battling his illness in the fall.

We were fortunate to get the chance to chat with him after quite the performance in Rupholding, and to see where he was there, in comparison to their week in Antholz-Anterselva, Italy.

You had a setback with illness and joined late because of that, but you looked strong in Rupholding, Germany, how do you feel being back?

The races last week in Rupholding went well for me. I’m really happy; it was a big positive sign. I really feel that my form is coming back, which is nice, I miss that, you know? Being sick was tough but I’m really glad to be headed in the right direction and to be back on the circuit.

You looked solid in the sprint last week, what were your thoughts during your missed prone shot?

I was kind of bummed with that miss. I would describe it as a mental miss, an errant shot. I was disappointed with it, it was a silly little error on my part, but I’m pretty happy overall. It was a bit of a step up from this season and over the summer, so hopefully there will be less of those in the future.

What did you do differently in the standing round to shoot clean?

Nothing too special because the more I think about it, the harder it gets. I have some good focus keys that I typically work with, just little mental notes that really help me work in the right way and I came back in and had a solid standing stage. 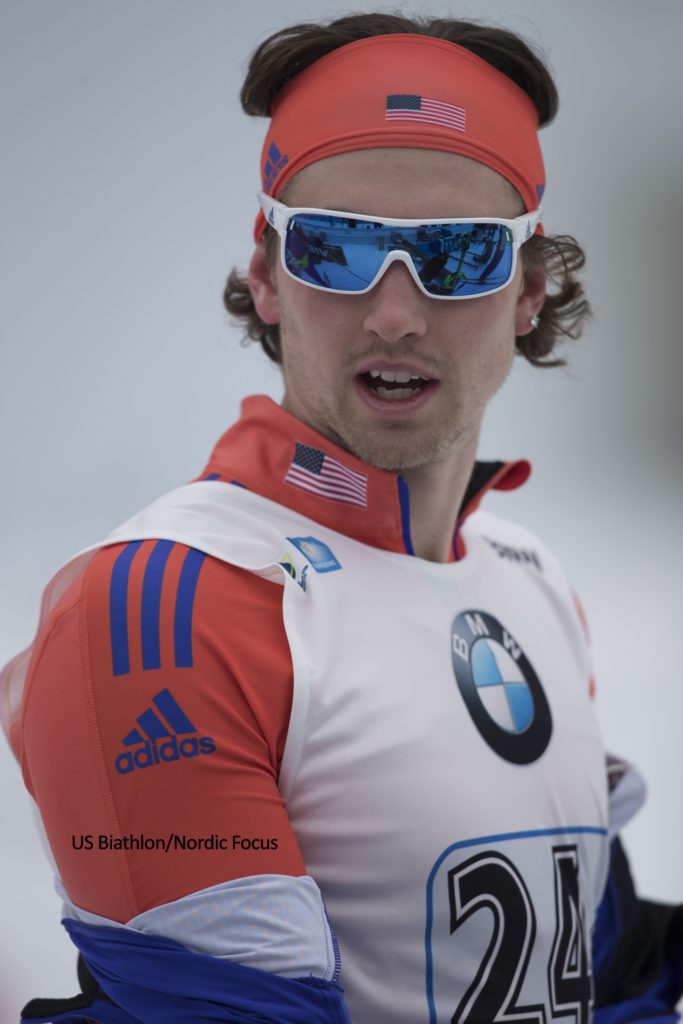 Sean before the relay in Ruhpolding, Germany

You looked strong during the last 500m or so with Arnd Peifer of Germany and your own teammate, Lowell Bailey in the mix, how are you feeling about your skiing right now? What does such a charged moment like that feel like?

Well that was a lot of fun. Charged is a great way to put it, the crowd was amped up. The chance to ski the last section with those two guys was a real treat. For me it was a big boost because, in order to get back to the physical shape at the high racing level that I’m looking for, it’s really important to do these hard efforts. So a little extra push at the finish really just helps motivate you to keep the pedal down and bring it all the way in, which is really fun.

You placed 43rd in the pursuit on Sunday, how did that race feel verses the sprint?

So Sunday was interesting, the course was tougher and it was pretty snowy. When new snow is falling it slows down the skiing, even though we have really good skis and excellent waxing staff, the conditions were a little bit slower. After coming back from my illness, going into the third race of the week I had three good laps and then faded on the end in the last two. It was a good race in some ways; it was a stepping-stone and also a good workout to get back into racing shape.

Aside from doing the best you can for the season, what are some specific goals that you have for yourself?

All of my original goals got thrown away when I got sick, so really my main goal for the season is to prepare for the World Championships (in Austria) coming up as best I can. That’s kind of the big thing. There are a couple of relays there, I’m not sure I’ll be in both of them, but to be in good racing shape for those and be in the best form I can and have some good results there is the goal.

It seems you have a rigorous summer training regimen, how does that change when you are in season?

The in season training regimen is a lot different than the summer one because we’re racing so much. The total hours go way down. The hours per week that we are actually skiing are much lower because we are basically trying to race and recover and repeat that cycle. We’re racing three or four days one week and then doing it all over again the next. We just try to recover as best we can with a ton of short jogs and easy workouts to allow the muscles and the body to recover as much as they can in between these really strenuous races.

Are you excited about your future trip this season to Pyeong Chang (site of the 2018 Olympics)?

I am excited for it, it’s going to be a long trip, but I’ve never been that far east before, so that will be cool. I’m looking forward to seeing some new places and some new cultures and will hopefully get a good look at the Olympic venue. It’ll be interesting to learn a few things and to get a little bit of an idea of what we’re in for next year.

What is your favorite venue on the circuit?

Antholz is one of the better venues and one of my favorites for sure. The course here is really good and a beautiful place in the mountains. It’s always good weather and one of the best stops during the season with a really good course that’s always fun. Some of the other courses along the way have a lot less personality than the one here. I also really like, although I didn’t get the chance to race there this season, to race in the Czech Republic. Nové Město (in the Czech Republic) has a really good course as well and there are races there at night and there’s A LOT of fans. It’s just a great atmosphere and a really fun place to race. I would say those are my two favorites.

What is a typical traveling day like for you and the team?

Well traveling days are pretty logistically intensive, especially when we are flying. Some of the events we can drive in between. We have to pack up all the skis, waxing equipment and then all of our personal duffels and rifle gear as well and get it all into the car. It’s like a packing extravaganza. If we’re flying, we have to allow a fair amount of time to check in and for all the extra hoops we have to jump through because we’re flying with rifles. So flying is pretty rigorous. Driving in between is obviously a lot easier and we can just throw everything in the car.

You are competing with athletes from all over, what language do most use to communicate with one another? Does this change from country to country and how do you find yourself communicating with other athletes?

A lot of people speak English, but another two common languages are German and Russian. There are a lot of nations competing on the circuit so there are a lot of languages flying around, but I would say if you knew one of those three languages you could get by quite well.

Last question, what is your favorite part about competing in the world cup circuit?

My favorite part about competing is competing. I love to race and really enjoy the atmosphere at these big races and the high level of the field. Just the whole process I really enjoy and when I get the chance to go out there and give it the best I’ve got. It’s very fun and satisfying for me.

After our chat with Sean, he went on to anchor the men’s relay in Antholz to bring them to an astonishing 6th place finish, a great high point as they head into the World Championships.

Sean, as well as his teammates Tim Burke, Lowell Bailey, and Leif Nordgren, has been named for the World Cup Championship, which will be held in in Hochfilzen, Austria in early February. Currently Sean’s team remains in Antholz, Italy to train for the upcoming championships.

You can learn more about Sean at his website: www.seandohertybiathlete.com and you can watch all of the World Cup races live online at http://www.eurovisionsports.tv/ibu/ The next races take place starting on February 9th.

Interview done by Victoria Weigold. She lives in the Mount Washington Valley and works as a Marketing Specialist for Rapid Insight, a software company in Conway that is also one of Sean’s sponsors. 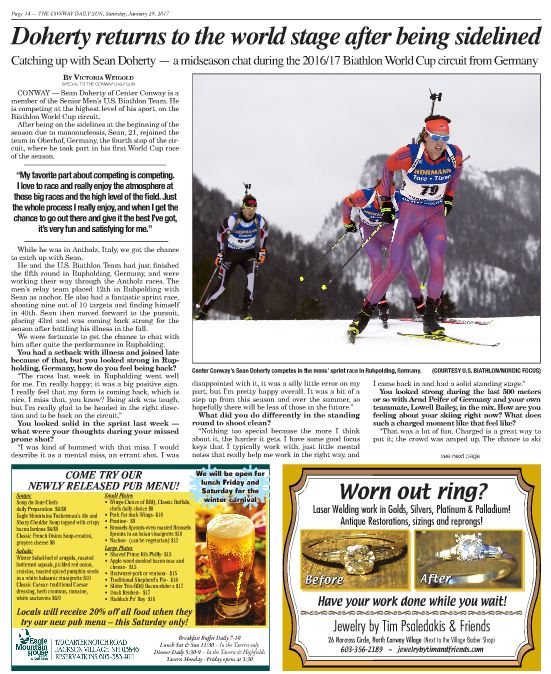 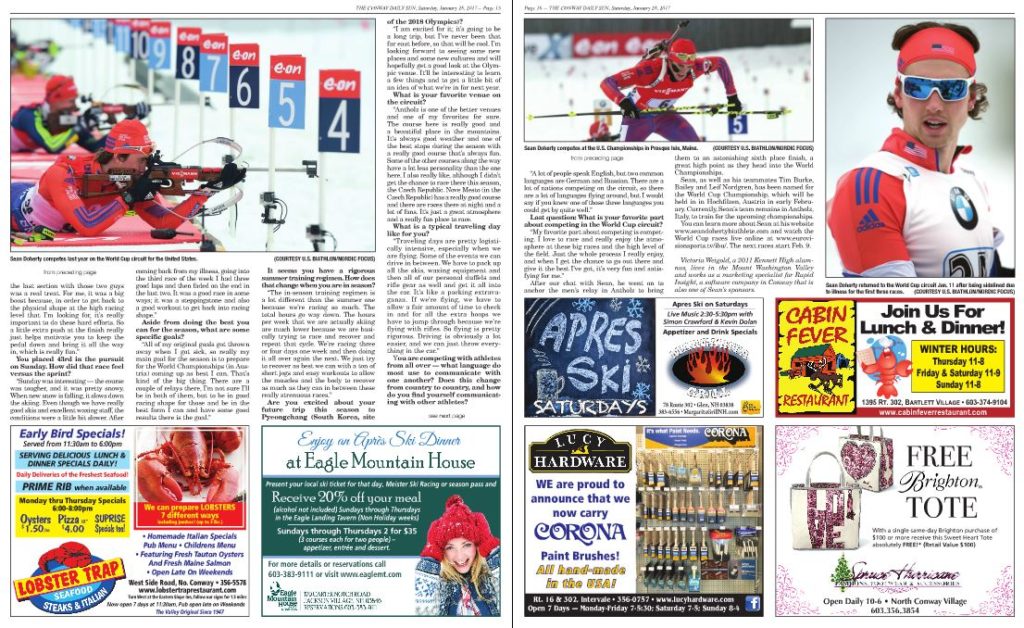